Social Media Marketing For Businesses in 2020: Which Platform Is Best? 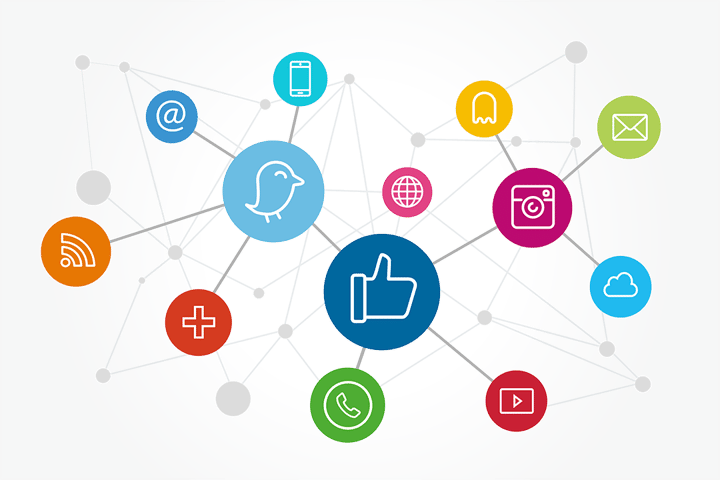 The popularity of sharing just about anything and everything on social media sites has steadily continued to skyrocket,  with some referring to the "slow and painful death of print" as how "Internet Killed the Newspaper Star." Back in the day when they actually played music on MTV, this was a clever and ironic twist on the first video ever aired on this channel, "Video Killed The Radio Star" performed by the Buggles. (Yes, I can remember that far back.)

Flash forward to today and living in a COVID world, people are spending more and more time on social media because it gives us contact with others outside of our four walls, and frankly, fills some time we might have used in other ways if our regular activities weren't cancelled.  If you weren't already posting and/or advertising your business on social media you may be thinking it's time.

Choosing the right platform for social messages is an important step. Before you dive in head first you should consider a few things.

Who Are You Trying to Reach?

You need to know who you're trying to communicate with before choosing the best platforms. There are some who would be considered the "older crowd" at the ripe old age of 30 and over. The younger crowd would be 18-30.  Knowing  who your audience is, including their general age and interests, is going to help you figure out where they're at.

Deciding Which Social Media Platform is Best for Your Business

We all recall when co-founder Mark Zuckerberg was being raked over the coals by a  Senate committee in 2018. Headlines shared how he began back peddling and apologizing for recent data breaches and other trust-related issues with users on this popular site. In addition to this embarrassment, for the first time in over a decade, YouTube dethroned Facebook as the number one platform on the internet.

Despite this type of negative attention, Facebook still boasts that 70% of the US population has a Facebook account. It remains a top social media platform for the adults over age 25, with 74% of them accessing their accounts every day.  However, Facebook is quickly being dethroned by it's younger sibling, Instagram.

Unfortunately for businesses, in January 2018 Facebook announced that it was giving users more control over what they see in their newsfeeds. This means businesses are more likely to get squeezed out unless they're willing to pay to play – for ads.

For more information about advertising on Facebook, check out "Five Tips For Running Facebook Ads That Produce Results."

But if Facebook continues to lose traction with the younger crowd, Instagram and TikTok will give them and YouTube both a run for their money for their coveted spot on top. Also if this trend continues, similar to the demise of things like the use of telephone books, Facebook is likely to become a place to connect with older audiences, mostly those in their mid-thirties or older.

Similar to the status of FB, YouTube is competing with a growing number of other, younger video-based platforms.  Businesses should be sure they have a version of all their videos out there so they can be found, even if the viewer is not on the business' website.  We know that video content is a little harder to produce, but it's so important to figure out given the following stats about YouTube:

If a picture is worth a thousand words, clearly video is worth a million more. When it comes to the sharing of video content, YouTube, Facebook and Instagram are the clear winners. 93% of business report getting a new customer after posting a video on social media.

In 2020, Instagram has quickly jumped to take over the top social media platform as far as the most daily active users.

Many millennials and a majority of younger users (under 21) have been migrating here to do more than look a pictures. They're using it to communicate with their friends online, often as much or more often than they text one another.

As time goes on, Instagram's lead over other sites like LinkedIn, Pinterest and Twitter continues to expand. If marketers are targeting the 20 to 40-something year old audience, or if the products you're selling are easily communicated in a video or photos, Instagram is a good choice.

TikTok is a new kid on the social media block, but it is one that you should be paying attention to. Especially if you're interested in catching the attention of the younger population. In Q1 2020, TikTok became the most downloaded mobile app of all time!

TikTok has 26.5 million monthly active users from the United States alone, and 41% of those users are aged 16 to 24. In addition, the majority (90%) of these users are visiting TikTok multiple times per day, for an average of 52 minutes per day in the app.

Along with Instagram, TikTok is a great place to showcase products and services in videos, and since only 4% of social media marketers are currently using the platform, it is a great way to stand out.

The primary platform for business relationships is LinkedIn. It has a more intelligent and wealthier user base compared to other social media channels. Roughly half of the registered users on LinkedIn have a college degree compared to just 9% of their members who possess a high school diploma. When it comes to connecting with colleagues or other business people online, this platform reigns supreme with:

Currently, LinkedIn holds a 50% share of the social media networking marketplace to B2B website and blogs. LinkedIn still holds a solid, strong stock of attention and interaction among business and professional audiences.

While Pinterest has held a predominantly female audience with women accounting for 80% of their membership in the past, men have starting signing up for 50% rise in recent sign-ups. Because online shopping is increasing, so is interest in Pinterest as a platform for planning purchases. Nearly all users report using Pinterest to get ideas and plan a purchase. As a growing source for shoppers, half of their members admit to making a purchasing after seeing a promotional pin and:

This platform is a good venue for showcasing quick tips and tricks along with infographics as long as these posts are image-heavy.

Popular with the POTUS and many celebrities over the years, the short blasts on this platform are seen by more than 325 million active monthly users. Remember when Ellen DeGeneres' star-studded selfie crashed the Twitterverse and set a new record on this platform? While sometimes it may seem like this occurred just the other day, that headline-grabbing event happened almost five years ago now.

During this time, the popularity of this platform has been on the decline and even their stock has dropped as a result of this trend. But don't give up on Twitter just yet since they still garner a youthful audience with 40% of those aged eighteen to twenty-nine-years and a recent 9% growth in new subscribers. With 95% of Twitter followers engaging on YouTube, 90% found on Facebook and 73% of their users on Instagram, it's an effective method when it comes to multi-channel marketing strategies.

Apologies for another shameless eighties reference, but similar to the trends we're seeing with the rise in rates of younger users migrating to TikTok and Snapchat, keep your eyes on newer platforms when it comes to rising stars like Reddit, WeChat and WhatsApp. Along with other lesser-known sites such as Messenger, Qzone and Sina Weibo, their MUA rates (number of monthly active users) are in the millions and in some cases billions of people interacting on these platforms that are growing in popularity.

It seems that a new platform pops up every few years. And of course, as of the time we last updated this blog, TikTok was still allowed in the U.S. We're watching closely to see what happens. This could put yet another platform on the horizon for popularity.

How Are You Going to Communicate on Social Media?

Each platform has some unique characteristics.  Some businesses have a lot of photos, while others may not depending on what they're selling. If you are selling to the younger crowd, you're going to need to find a way to get photos and videos even if the product or service isn't super photogenic.

Posts (Free): This is commonly done on Facebook, Instagram and LinkedIn. Facebook and Linkedin allow you to post an article with a link to something on the web. This is a good way to get more visitors to your website, especially if you spend a little bit of money and "boost" it for more visibility.

Twitter posts need to be short, but allow for links to other sites.

Hashtags are used to be found easier. They're especially important for Instagram and Twitter. Research the hashtags that people might be following that you can join in with. And be sure to spell your hashtag correctly! (You can also use hashtags on Linkedin and Facebook.)

Stories (Free): Using the stories feature on Facebook, Instagram or SnapChat can be a good way to walk someone through an experience or show something interesting that's happening around you. Try not to post something with a whole bunch of words or have too many things flashing or moving. Stories disappear from the viewer's screen too fast to read too much and when there's too much going on in a single image, you can't focus on what the message is.

The example below was a bit hard to read, even though we had time to read it. Choose fonts carefully. 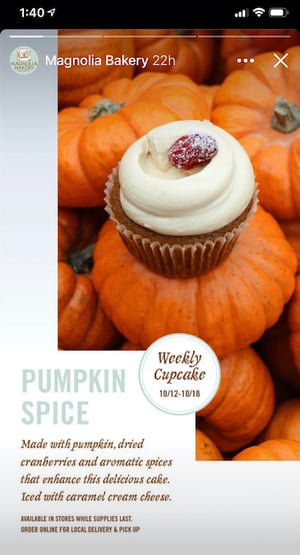 And remember, stories are only visible on most platforms for about a day before they're no longer highly visible. Here's an example that wasn't super easy to read.

Videos (Free): Get your video out on YouTube, even if it's not a perfect work of art. Have you noticed that some of the most popular videos are clearly created by someone who is not a videographer? We're not saying be sloppy, but it's more important that you get the information out there than it is to spend days and tens of thousands of dollars to get it produced.  Facebook prefers you load up you video to their website if you're going to post it there. Instagram requires you to post it on their platform. Linkedin and Twitter allows you to post a YouTube video and share it.

One of the keys to growing your audience on YouTube is to increase the subscribers who follow you. Be sure your mention subscribing in your videos and take advantage of the tools in YouTube to showcase other content that would interest viewers.

Ads (Paid): It can be worth the money to target specific audiences on various social media platforms. Use some of your videos and photos to catch their eye, or create a blog article that compels your audience to want to click and learn more. Every platform has an option for advertising. Make sure you choose one that matches where your audience is hanging out.

And, if you're trying to be super geographically targeted there are options that allow your ads to people who have visited specific zones. Be sure you're using your ads to the best of your ability to target current or potential customers at various stages of their buying journey.

Businesses should choose one to three platforms so they aren't spreading themselves too thinly on social media. Develop a routine to ensure that you're monitoring these sites daily to keep your online audience engaged. By establishing why you are using social media, recognizing your audience’s needs, and knowing the right places to appear, you can increase awareness, increase visits to your website and increase sales. And after all, that's why you're doing all of this in the first place.