What Are Google's Featured Snippets and Why Are They So Important? 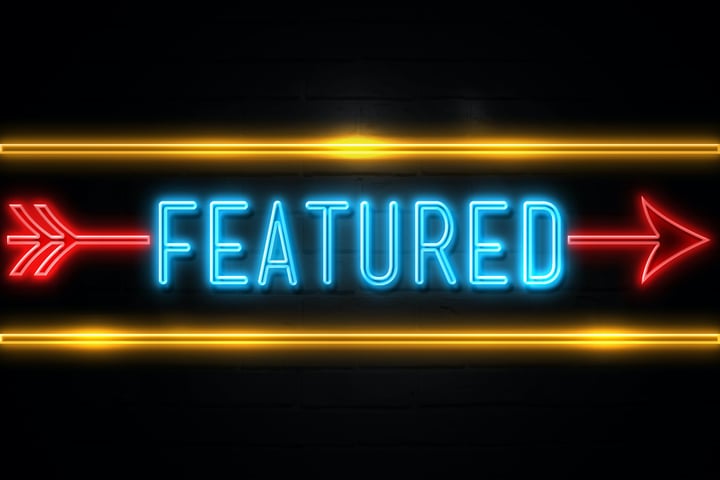 The search engine optimization (SEO) game has changed a lot over the past few years. Getting your website to stand out amongst the crowd is an increasingly difficult proposition. New competitors are popping up all the time, pushing content to draw the eyes of users towards them and away from you.

One of the best ways to attract attention is to reach Rank 0 (zero)  or take over the featured snippet.

Rank 0, sometimes also referred to as Position 0, is the highest organic ranking result on Google Search Engine Results Pages (SERPs). This places your site above the fold and all other organic search results. (Although, featured snippets are still shown below paid advertisements related to the search terms.)

🤔Are you wondering "What is a SERP?!" - Start with this blog.

What is a Featured Snippet?

Featured snippets are initial pieces of information that could answer a user's query before they click on a web page. The information, which is pulled automatically from a top ranking web page in Google's index, shows the following:

They are sometimes referred to as "answer boxes", which is a fair, but confusing term that may make people think of the instant answer feature in a search engine, which provides information without citing any source.

You might be wondering how giving the answer to search results without the need to go the specific page makes sense for as a method for increasing traffic, but featured snippets have been proven to do just that.

If a user's search requires more detail to get a fulfilling answer, then they will be much more likely to click through to the site providing the snippet. The evidence is overwhelming.

Featured snippets also confer a lot of importance because of the amount of space they can take up on the results page.

How Many Types of Featured Snippets Are There?

Featured snippets tend to be used to answer questions, but they can also offer other capabilities and various forms. Paragraph snippets, also known as definition boxes, tend to 40 to 60 words long and are by far the most popular type of snippet - they make up approximately 82% of snippets according to this study - but other versions are equally valuable.

Aside from paragraph, featured snippets can also appear as:

Mixing up the way your content is displayed on a page will greatly help you gain Rank 0 prominence on Google. There is no limit on how many snippets can be triggered by a piece of content, so search engines may choose multiple forms of information at the same time.

There are two types of list that can appear as featured snippets - ordered and unordered. Ordered list are simply lists that are in number order; while unordered lists are typically bulleted. 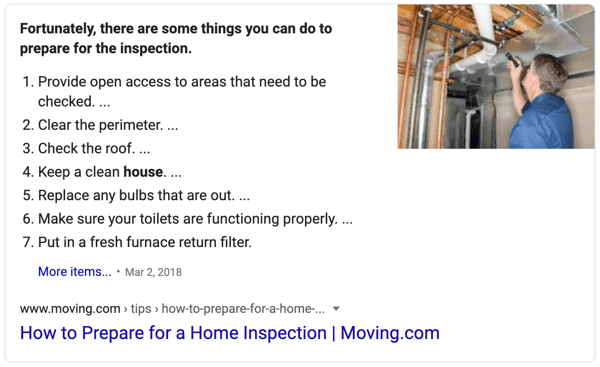 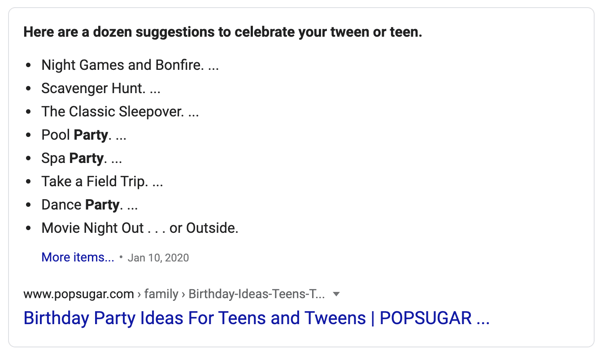 Video can show up in your search results two ways. The first way, as a suggested clip, is defined by Google as a featured snippet. The other way is as Rich Results (which we address a little later.) Google released video suggested clips as a featured snippet a couple of years ago. This type of featured snippet can take some time to set-up so that Google knows what you are trying to explain to potential visitors, but they can be highly valuable since they take the searcher directly to the place in your video where their search answer can be found. 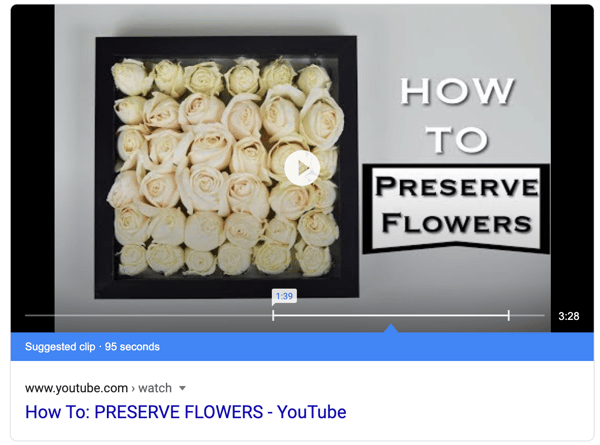 Table snippets often show up for posts that contain comparisons charts or content with prices, rates, years, and other numerical data. Google seems to value well organized content. Below you can see an example of a featured snippet in table form. 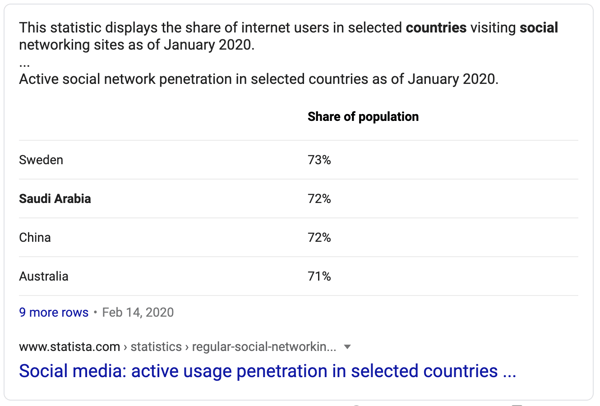 Google's 'People also ask' (PAA) snippet is pretty handy! This snippet provides questions (and answers) that are related to the originally searched for phrase.

Google's definition of a rich result is

"An enhanced result in Google search with extra visual or interactive features."

Reviews, top stories, videos, comparisons, events, blogs, podcasts, and recipes can all be displayed as rich results in Google's search results. Plus, that list is ever-growing and evolving because Google is constantly reviewing, testing, and releasing updates to search results that are optimized best for the users. There are a few example of rich results below. 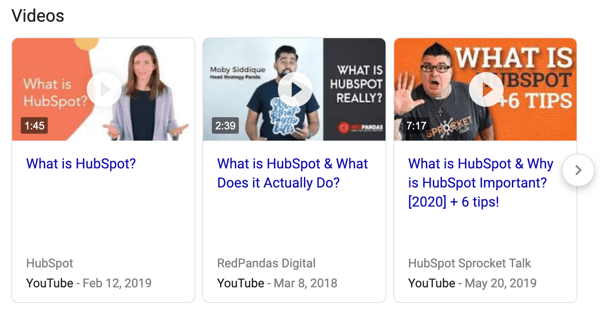 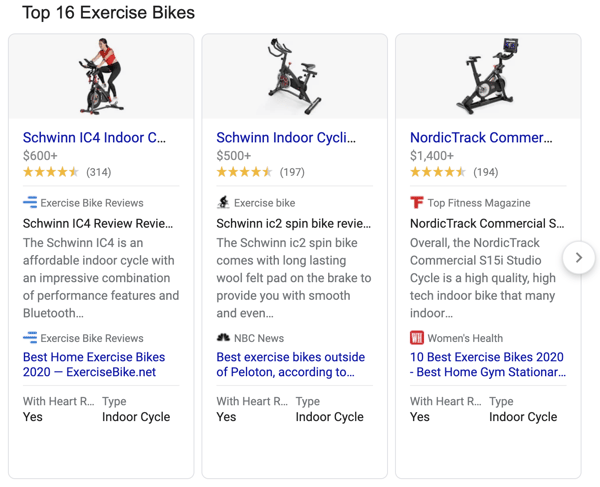 Of course this one comes with a pandemic warning, but you get the idea.

It is a common misconception that Rank 0 is mostly used for the most popular search words and phrases that are entered in higher volumes.

In reality, the opposite is true. After going through two million search entries with featured snippets, Ahrefs discovered in a study that most snippets are triggered by queries with fewer than 50 monthly searches. This means that more detailed searches and long-tail keywords are more likely to get your site to Rank 0. They also noticed that the vast majority of keywords that trigger snippets aren't formatted as questions, prepositions, or comparisons.

The 30 words most frequently used in search queries with featured snippets are:

The top 20 websites with the most featured snippets are:

How do you get featured snippets on Google?

Attaining a Rank 0 result takes a lot of research and effort to achieve. And, even at that, there is no guarantee that you'll get there. But there are some things you can do to send signals to Google that will put the odds in your favor.

Secure the Snippets You Own

To keep anyone else from taking over your featured snippets, you have to make sure that each of them match their search query as much as possible. You can do this by:

There is a chance that your site already has a ranking for some featured snippets.

You can use keyword tools like AdWords Keyword Planner, SEMRush, or the Chrome extension Keywords Everywhere to come up with long-tail keywords and phrases that are relevant to the services you provide that could be used in your content to help you appear in Position 0.

Giving Google a better alternative to the snippets offered by other websites is key to gaining Rank 0 priority. Search the phrase you'd like to rank for and some variations on it to get an idea of what sort of content you should be making, and to determine if there is a snippet present already. If there's not, try to create content that could be used as a snippet. And if there is, see if you can create something better that could potentially also be used as a snippet (or instead of the current snippet).

It's also helpful to look at the ways non-industry people talk about and search for information on the topic. Google's "People Also Ask" box is a helpful resource in this regard.

You can engage in all the right processes to lift your website to Rank 0, but if the rest of your content is hard to process and not well-organized, people won't stay on your website. That means any good traffic you get from the snippet doesn't turn into leads. Make your answers concise (about 50 words or less) but filled with enough information to answer the question.

It's impossible to make the most of your digital inbound marketing efforts without optimizing the substance and style of the content of your websites. Featured snippets are best used as one of many features in your SEO process. You might not get to rank 0 through optimization, but your organic ranking should still improve regardless. And that improvement still brings tangible benefits. Any position in the top 10 can gain a featured snippet consistently, bringing in more traffic to your website.

All of this can sound overwhelming to the inexperienced, but it gets easier once you establish a workflow and develop an ingrained understanding of what your target audience is and wants. Search engine optimization (SEO) is one of the several services we offer at 30 Degrees North. If you would like to schedule a free consultation or ask a question about any other feature of our work, we would love to talk marketing with you! 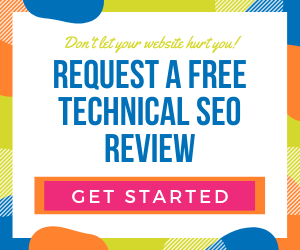 2021 Google Core Web Vitals Update: What You Need to Know 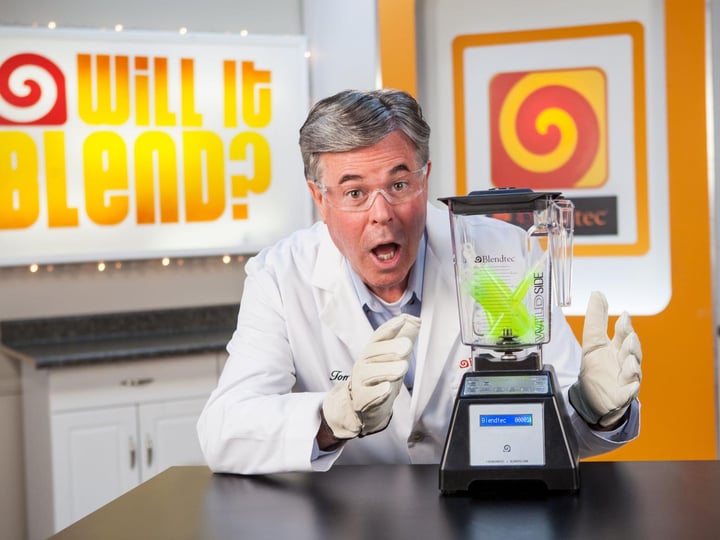 How to Get SEO Value from Your Video Content 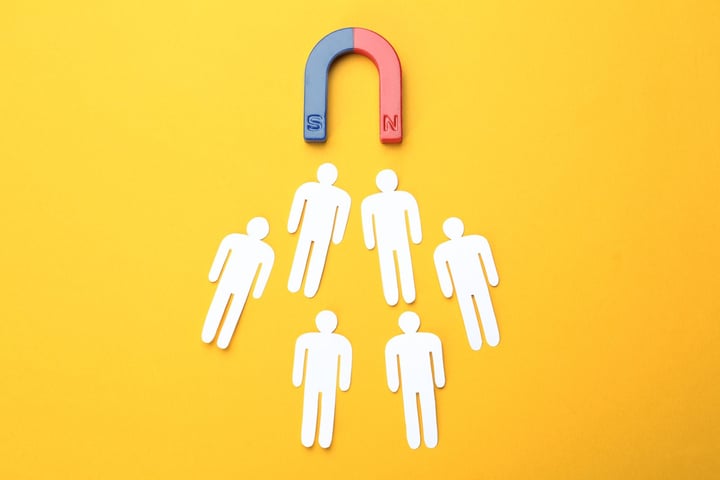 What Is Inbound Marketing and Can It Work for Your Business?